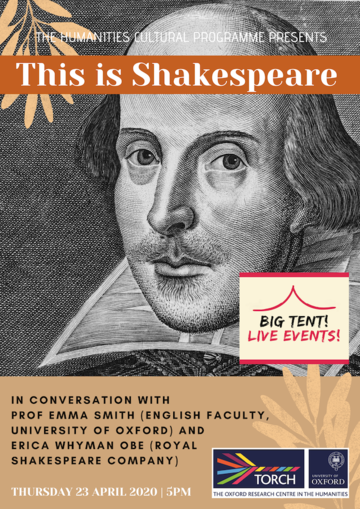 Both Emma and Erica have recently had their Shakespeare events cancelled; Erica’s production of The Winter’s Tale for the Royal Shakespeare Company, and launch events for Emma’s book This Is Shakespeare. In this conversation, Erica and Emma discuss these events, their hopes for them, and what Shakespeare offers us both now and in the future.

Professor Smith's research combines a range of approaches to Shakespeare and early modern drama. Her recent work has been about the reception of Shakespeare and about the scholarly and cultural investments in Shakespearean criticism. 'This is Shakespeare - How to Read the World's Greatest Playwright' is her latest publication (2020).

Erica joined the Royal Shakespeare Company in January 2013. She works closely with Artistic Director Gregory Doran on all aspects of artistic strategy, taking a particular lead on the development of new work, the contemporary relevance of the repertoire and the national ambitions of the company.

Erica led the team which reopened The Other Place in March 2016, a creative hub dedicated to daring theatrical exploration. Erica takes a lead on extending access, equality and diversity across all RSC activities and is passionate about participation in theatre-making.