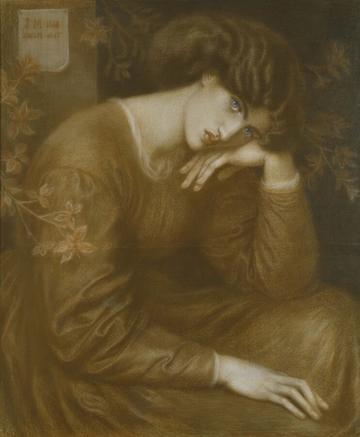 The Ashmolean is delighted to announce that it will re-mount its popular exhibition, Pre-Raphaelites: Drawings and Watercolours, which was shown for just five weeks in 2021.

Few people have examined the large number of Pre-Raphaelite drawings and watercolours held in the Western Art Print Room.  Even enthusiasts and scholars have rarely looked at more than a selection.  This exhibition makes it possible to see a wide range of these fragile works together.  They offer an intimate and rare glimpse into the world of the Pre-Raphaelite Brotherhood and the artists associated with the movement.  The exhibition includes works of extraordinary beauty, from the portraits they made of each other, studies for paintings and commissions, to subjects taken from history, literature and landscape.

In 1848 seven young artists, including John Everett Millais, William Holman Hunt and Dante Gabriel Rossetti, resolved to rebel against the academic teaching of the Royal Academy of Arts.  They proposed a new mode of working, forward-looking despite the movement’s name, which would depart from the ‘mannered’ style of artists who came after Raphael.  The Pre-Raphaelite Brotherhood (PRB) set out to paint with originality and authenticity by studying nature, celebrating their friends and heroes and taking inspiration from the art and poetry about which they were passionate.  This innovative approach and their characteristic styles influenced younger generations of British artists well into the 20th century.