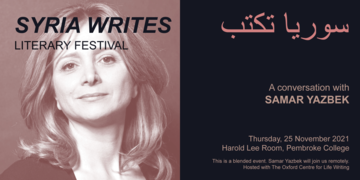 Samar Yazbek is a Syrian writer and journalist. She was born in Jableh, Syria, near Latakia, in 1970, and studied Arabic literature at Latakia University.

Yazbek has been a prominent voice in support of human rights and more specifically women's rights in Syria. In 2012, she launched Women Now for Development, an NGO based in France that aims at empowering Syrian women economically and socially and at educating children.

In 2010, Yazbek was selected as one of the 39 most promising authors under the age of 40, by Beirut39, a contest organized by the Hay Festival. In 2012, she was chosen for the prestigious PEN/Pinter Prize "International writer of courage", in recognition of her book “In the Crossfire: Diaries of the Syrian Revolution”. She was also awarded the Swedish Tucholsky Prize, and the Dutch Oxfam/PEN Prize, in the same year. In 2016 Yazbek’s literary narrative “The Crossing”, which was translated into 16 languages, was awarded the prestigious French “Best Foreign Book” prize. Her novel, “The blue pen”, was in the third and final selection of the French Femina award. Her most recent book, “19 women”, is a non-fiction narrative that collects testimonies of Syrian women who have bravely resisted both the Asad regime and the Islamists.

Samar Yazbek‘s novel “Planet of clay” (also known as The blue pen) is a finalist to the 2021 National Book Award, and is competing with 4 other titles in the translated fiction category!

We are delighted to be partnering with the Oxford Centre of Life Writing for our final author talk with Samar Yazbek. This will be a blended event and Samar Yazbek will join us remotely.