Farah Karim-Cooper is Professor of Shakespeare Studies, King’s College London and Co-Director of Education at Shakespeare’s Globe, where she has worked for the last 17 years. Farah has recently served as President of the Shakespeare Association of America after having served three years as Trustee and Vice-President. She is on the Advisory Council for the Warburg Institute and the Council for the Society of Renaissance Studies. She is also on the Board of Trustees at the Lyric Hammersmith Theatre. She has held Visiting fellowships around the world. She led the architectural enquiries into early modern theatres at Shakespeare’s Globe, overseeing the research into the design and construction of the Sam Wanamaker Playhouse, the Globe’s indoor Jacobean theatre.

She has published over 40 chapters in books, reviews and articles and is a General Editor for Arden’s Shakespeare in the Theatre series and their Critical Intersections series. She has written two books: Cosmetics in Shakespearean and Renaissance Drama (Edinburgh University Press, 2006, revised ed. 2019) and The Hand on the Shakespearean Stage: Gesture, Touch and the Spectacle of Dismemberment (Arden 2016). She has also co-edited Shakespeare’s Globe: A Theatrical Experiment with Christie Carson (Cambridge University Press, 2008), Shakespeare’s Theatres and the Effects of Performance with Tiffany Stern (Arden 2012) and Moving Shakespeare Indoors: Performance and Repertoire in the Jacobean Playhouse with Andrew Gurr (Cambridge University Press, 2014); she recently edited a collection for Arden, Titus Andronicus: The State of Play (2019) and has edited John Webster’s The Duchess of Malfi for the Routledge Anthology of Early Modern Drama, edited by Jeremy Lopez (2020). She is currently writing a book on Shakespeare and race called The Great White Bard with One World and Viking/Penguin, due out in 2023.

In 2018 she curated the Globe’s first Shakespeare and Race Festival. She is an executive board member for RaceB4Race, a collective of scholars and institutions that seek racial justice in the field of pre-modern literary studies. In the UK she is creating the first ever Scholars of Colour network. 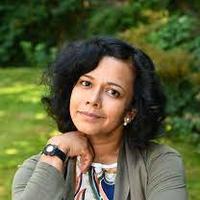 Nandini Das is Professor of Early Modern English Literature and Culture at Oxford University, Fellow of Exeter College, and Honorary Professor of English Literature at the University of Liverpool, UK. She works on Renaissance literature and cultural history, with special emphasis on travel and cross-cultural encounters between Europe and Asia in the sixteenth and seventeenth centuries. She has written Robert Greene’s Planetomachia (2007), Renaissance Romance: The Transformation of English Prose Fiction, 1570-1620 (2011), and published widely on Renaissance literature and cross-cultural encounter. With Tim Youngs, she has co-edited The Cambridge History of Travel Writing (2019), which covers global Anglophone and non-Anglophone travel writing from antiquity to the internet. She has also co-written and edited Keywords of Identity, Race, and Human Mobility in Early Modern England (2021) and Lives in Transit in Early Modern England: Identity and Belonging (2022) with the ‘Travel, Transculturality and Identity in Early Modern England’ (ERC-TIDE) project team, of which she is the director. Her book on the first English embassy to India with Bloomsbury is due to be published with Bloomsbury in 2023.

Farah and Nandini have a long and well-established track record of collaboration. Nandini has delivered multiple talks at Globe-organised events, most recently at the Women and Power Symposium (December 2021). Farah is a contributor to the forthcoming Oxford Handbook of Travel, Identity, and Race in Early Modern England, 1550–1700, edited by Nandini. Farah will also hold a Visiting Fellowship at Exeter College, where Nandini is Fellow in English, over the duration of her TORCH Humanities Cultural Programme Fellowship.

Farah’s collaborative project with Nandini during the Fellowship period will be a major, year-long inquiry into future directions in race and identity in early modern drama. It places particular emphasis on developing new ways in which research can be used to produce innovative new theatrical practice and new writing for the stage, drawing on ERC-TIDE’s research and the Globe’s extensive track-record in bridging the gap between practice and performance.

Part of the Humanities Cultural Programme, one of the founding stones for the

future Stephen A. Schwarzman Centre for the Humanities.