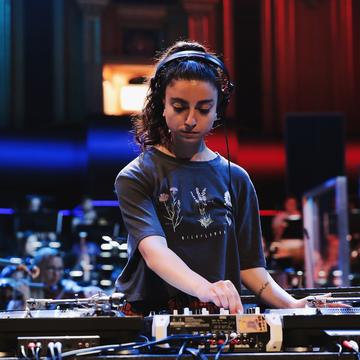 Shiva Feshareki is a British-Iranian experimental composer and artist, described as the most “cutting-edge expression of turntablism” (Strange Sounds from Beyond). She exists at the intersection of many artistic scenes, experimenting with electronic & club music, concert & orchestral, art & design and free improvisation.

Shiva was honoured with the 2017 Ivor Novello Award for Innovation (formerly British Composer Award), The Royal Philharmonic Society Composition Prize (2009), as well as the BBC Young Composer’s Award (2004) with her first scored composition.

As a composer and artist Shiva uses an array of technology from vintage analogue tape echo, vinyl turntables, CDJs to state-of-the-art 360° ambisonic technology. Her tools also extend beyond electronic technology, using advanced 3D orchestration to score acoustic instruments in spatialized form, for live ensembles and orchestras. Described as “A terrific sonic experience… Among her musical ideas there’s thrash metal and dance music, as well as marvellously fresh-sounding orchestral-gestures, assaulting or beguiling the audience from all angles” (Richard Morrison - Chief music critic of The Times).

Her signature turntable performances fuse together sonic palettes using hyperphysical electronic manipulations and sampling techniques. Cuts from drum and bass, garage, gabber, deep minimalism and her own orchestral works are yielded to create complex live compositions. Tom Service from Radio 3 describes her turntablism as “One of the most astonishing acts of musical alchemy of the last decade”. A defining feature which she brings to every work is her orchestral manipulation – an ability to morph and reshape entire orchestras into new forms of live electronic sound: A machine improv. of classical sound.

Shiva’s versatility and breadth are undeniable, from performing unheard works by Daphne Oram at the BBC Proms, her own concert music with the likes of BBC Concert Orchestra, London Contemporary Orchestra, Ensemble Modern and Aarhus Symphony Orchestra to performing at Sonar (Barcelona), Mutek (Montreal) or collaborating with some of the world's most distinguished avant-garde artists, scientists, jazz improvisers and pop producers.

"Her manipulations illuminate the most incredible textural and harmonic treasures embedded in the corners of the music; the sort of details that are otherwise hidden behind the framework of melody and song"

“A terrific sonic experience… Among her musical ideas there’s thrash metal and dance music, as well as marvellously fresh-sounding orchestral-gestures, assaulting or beguiling the audience from all angles… gripped me from the first to the last.”

Humanities Cultural Programme, one of the founding stones for the
Stephen A. Schwarzman Centre for the Humanities.