Heralding Medieval Studies. The Role of the OMS Communications Officer

Heralding Medieval Studies. The Role of the OMS Communications Officer

Are you a doctoral student or postdoctoral researcher in medieval studies at Oxford interested in becoming more involved in running the Oxford Medieval Studies Programme and the MSt Medieval Studies? After two years of making the most of the dual role as herald (for the OMS news) and mentor (for the Masters students), Karl Kinsella has decided to pass on the caduceus to another medievalist. Here he describes what drew him to the position and what it entailed. Look on our News page for the job advertisement.

I wanted to be OMS’s communications officer for two reasons. First, when I was a DPhil student, I found it frustrating when discovering an interesting event happened in the University, but only a small group of people knew about it. This usually was not a deliberate act of exclusion, but simply a case of there being no consistent and stable platform on which to advertise any events. For the most part, the University and even the medievalist community within it relied on word of mouth to spread the word. I wanted to make sure that you all knew what was happening, and then you could make your mind up as to whether you wanted to go or not without getting frustrated after the fact.

Second, I had been a full-time lecturer at the University of York prior to my current position as a JRF in architectural history; at York I taught the masters students in the Centre for Medieval Studies every term. Working with masters students is a joy and I knew my research post would restrict me from this type of postgraduate teaching in Oxford. The communication officer works closely with the convenor for the MSt Medieval Studies to help with organising the Trinity Term seminar and meeting students to discuss their essays and any other issues they might be having. Carrying out the role involves communicating with and talking to students who may have difficulty orientating themselves around the University and their place within it.

The role of Communications Officer for Oxford Medieval Studies is one I’ve enjoyed very much, not least because it gives you an opportunity to meet so many different people in Oxford and colleagues around the country. It requires a lot of talking and writing, two things (anyone who knows me will attest to) I rather like doing. As part of this, the front-facing aspect to the role is writing the Monday morning email that so many of you receive from me. Putting this together involves going through the medieval booklet and listing everything happening in Oxford that week, including making note of any changes that may have arisen in the meantime. During term time, you will hear of new things happening in the city that don’t appear in the booklet that you will have to try and make sure everything is included. OMS has established a good network, so that many people sending us information about an event is a useful and efficient way of advertising it. As a result, instead of having to go out searching for things, that information now comes to us.

Obviously the role has changed somewhat since March, but the core aspects remain the same: facilitating discussion between the medievalists at Oxford. The MSt Medieval Students were very brave this year and insisted they wanted to present their research at the Medieval Church and Culture Seminar, as happens every year. Helping to organise and chair these talks, alongside trying to keep track of changes happening across all the other seminars was a challenge, but I think Trinity Term was a relative success, not least with the help of Henrike Lähnemann and Francis Leneghan who have an outstanding capacity for organisation.

A highlight was, without doubt, the Easter Miracle plays that took place last year in and around St. Edmund Hall. The idea of communications officer was taken to its extreme by having to announce the different plays just before they begun, a job shared with my supervisor Lesley Smith. I think my mother’s dream of me being a priest was partly realised when I showed her the YouTube footage of me dressed as one, and so I can honestly say that even my family benefitted from me working with the OMS.

If you are even slightly interested in the post, I would recommend that you apply and try it out. I’ll still be around and happy to answer questions about it and do anything else I can to help. OMS’s work as an organiser and communicator is probably going to become even more important over the short and medium term, it would be great to be part of it. For me; however, I have a baby daughter on the way, someone I am greatly looking forward to meeting. When she’s older I can tell her about the time I was a priest in Oxford, and I’ll be sure to show her and her friends the video just to make it all the more embarrassing. I thank you OMS, my daughter less so.

Key facts: Apply by 20 August 2020, start date 1 September 2020 or as soon as possible after that. This part-time position can be held concurrently with a Junior Research Fellowship or a PhD scholarship. The payment for the role comes from the Humanities Division as part of the MSt Programme and amounts to £1,700 a year. Typical workload during term time consists of half a day a week, working with the Directors of the OMS Programme, Henrike Lähnemann and Francis Leneghan, and the Convenor of the MSt, Mark Williams.

If you are interested in this post, direct informal enquiries to one of the Directors of the Programme. The application should consist of a statement of interest, detailing what you would bring to the job, plus in the case of doctoral students a letter of support from your supervisor. Email this to OxMedStud@Gmail.com. 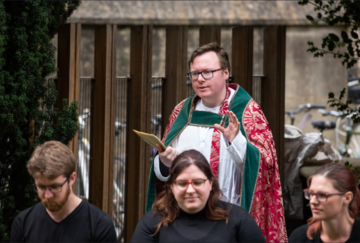