From Treasure House to Story House

As part of this week’s TORCH Goes Digital theme of Storytelling, Dr Oliver Cox reflects on the ways in which the stories told during a visit to a country house are changing, and how researchers across Oxford are contributing to this shift.

Before the radical shifts and impact of COVID-19 the country house was in rude health. The 1500 independent historic houses and gardens represented by Historic Houses welcomed more than 26 million visitors in 2019, and visitors to National Trust properties almost exceeded 27 million for the first time. Attracting more than 50 million visits a year, the UK’s historic houses are a hugely significant place and space where public history happens. The stories we tell to visitors have an enormous impact on the ways in which they understand and engage with the past.

This surge in popular interest is paralleled by an exploding galaxy of research into different and varied country house communities, and the development of a new language of research to capture these innovations. More than ever before, we’re confident in researching and communicating the notion that country houses and their estates are composed of multiple layers of value, that accrete and change over time, and – most importantly – are sustained through the fluid and complex interactions between people and place. Over the past seven years, the TORCH Heritage Programme has played a significant part in shifting the dial, initially through the Thames Valley Country House Partnership, and now through our strategic partnership with the National Trust and our ongoing collaborative work with Historic Houses and English Heritage.

In 1985 a blockbuster exhibition at the National Gallery in Washington D.C. created a distinct image of the country house; one which now feels reassuringly old fashioned. Treasure Houses of Britain: Five Hundred Years of Private Patronage and Collecting brought more than 700 collection items from more than 300 country houses across the Atlantic to be displayed in 17 period rooms across 35,000 square feet of exhibition space. A remarkable 990,774 visitors explored this enormous show in just under six months.

As Professor Sir David Cannadine suggested in The Country House: Past, Present and Future, ‘the message was as simple as the display was glittering: the country houses of Britain were “vessels of civilisation”, inhabited by grandees and gentry of exceptional culture and refinement’. The exhibition made the case that these owners were motivated, not so much for selfish reasons of personal acquisitiveness and capital accumulation, but rather for the eventual benefit of the nation as a whole, and for the many ordinary people who would eventually visit their houses. Yet this was also an exhibition which found it very hard indeed to talk about where the money had come from, and indeed, the structures of power and inequality that upheld these ‘temples of the arts’.

In the past thirty-five years there has been an enormous amount of rethinking and reimagining about how to approach, understand and engage with country houses and their estates: historically rather than nostalgically, and as functioning places of residence rather than as fetish objects. Much new and original work has been done which has uncovered and explained the many different purposes for which country houses were built, and the many communities and resources on which they depended for their construction and functioning.

Margot Finn’s 2020 Ford Lectures at Oxford – available to watch here - highlight how the country house was also enmeshed within global, and frequently exploitative, flows of capital and trade. Professor Finn suggests that this imperial context is one that has been frequently forgotten, if not deliberately ignored, within country house interpretation. At Powis Castle, this omission is in the process of being corrected by Dr Kieran Hazzard’s Knowledge Exchange Fellowship, brokered through the National Trust Partnership.

Oxford researchers are also placing the country house within a pan-European context. Led by Professor Abigail Green, Jewish Country Houses – Objects, Networks, People – is a four-year AHRC-funded research project, emerging from close partnerships with the heritage sector, is the first attempt to write these houses and their owners back into British, European and Jewish history and to establish their importance as sites of European – and Jewish - memory.

Two current doctoral projects are exploring the position of the country house in twentieth- and twenty-first century culture. Elena Porter is working with Historic Houses to understand the legislative and financial position of privately-owned country houses, whilst Isabel Budleigh is researching the National Trust’s approach to interpretation.

Taken collectively, these projects show the potential for the country house sector to be in the vanguard of developing co-produced research. Country houses can be convening spaces and facilitators: providing space and collections to enable discussion and debate, through which process we can hear many voices, and research many stories.

For the country house to regain momentum after COVID-19, they must not be afraid of what a late colleague of mine described as the ‘c-word of heritage’: change. The story of the country house is one of contingency, of class, of chance, of change, of prejudice and pride, not a nostalgic worldview of easy certainties and divinely-ordained progress. These are exactly the kind of stories that the next generation of digital native heritage consumers, and future advocates for the country house, are eager to engage with and experience.

Oliver Cox is Heritage Engagement Fellow at the University of Oxford. He co-ordinates, supports and brokers collaborative research and engagement projects between the University of Oxford and external partners in the UK and international heritage sector, through enabling individual researchers, research groups, students and professional services to develop mutually-beneficial collaborations.

Oliver leads the TORCH Heritage Programme, is co-Lead of the Oxford University Heritage Network and part of the team delivering the University of Oxford’s strategic partnership with the National Trust. Oliver co-leads the Heritage Pathway Graduate Training Programme. He is also the inaugural Humanities Innovation Champion for Oxford University Innovation in recognition of his external consultancy. 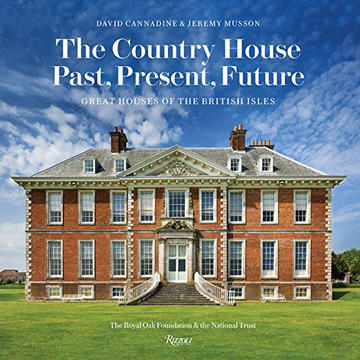