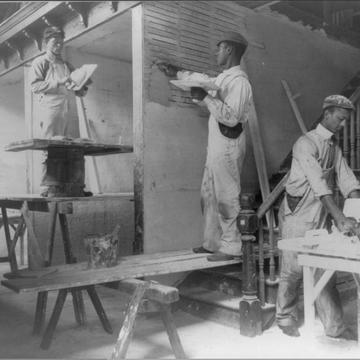 Between the end of the US Civil War and the start of World War I, thousands of American artists studied and worked in Paris. While popular thought holds that they went to imbibe culture and attain artistic maturity, in this four-part lecture series, Professor Emily Burns explores the various ways that Americans in Paris performed instead a cultural immaturity that pandered to European expectations that the United States lacked history, tradition, and culture. The lectures chart knowing constructions of innocence that US artists and writers projected abroad in both art practice and social performance, linking them to ongoing conversations about race, gender, art making, modernity, physio-psychological experience, evolutionary theory, and national identity in France and in the United States. Interwoven myths in art and social practice that framed Puritanism; an ironically long-standing penchant for anything new and original; primitivism designed by white artists’ playing with ideas of Blackness and Indigeneity; childhood’s incisive perception; and originary sight operated in tandem to turn a liability of lacking culture into an asset. In analyzing the mechanisms of these constructions, the lectures return to the question about the cultural work these ideas enacted when performed abroad. What is obscured and repressed by mythical innocence and feigned forgetting?

Projections of different ideas of innocence became entangled in the representation of Black US character in fin-de-siècle Paris. By pairing new research on blackface minstrelsy and painter Henry Ossawa Tanner in the American Art Association of Paris with the displays of Blackness curated by Black intellectuals in the “Exhibit of American Negroes” in the Paris Universal Exposition of 1900, Professor Burns argues that American minstrelsy in Paris built a racialized “primitive” identity that caricatured Black men as effeminate and emasculated, while the latter exhibit constructed innocence grounded in claims of youth, newness, and incipient culture. While the curators staunchly and effectively rejected narratives of primitivism, these tropes of the new simultaneously paralleled and reinforced performances of cultural innocence in the largely white US community in Paris.

Emily C. Burns is an Associate Professor of Art History at Auburn University where she teaches courses on eighteenth- and nineteenth-century American, Native American, and European art history. Her publications include a book, Transnational Frontiers: the American West in France (University of Oklahoma Press, 2018), which analyzes appropriations of the American West in France in performance and visual and material culture in the tripartite international relationships between the United States, France, and the Lakota nation between 1867 and 1914, as well as journal articles, exhibition catalogue essays, and book chapters related to art and circulation, US artists in France, and American impressionism. She is currently completing a co-edited volume with Alice Price on global impressionisms entitled Mapping Impressionist Painting in Transnational Contexts (forthcoming from Routledge).

During her tenure as the Terra Foundation for American Art Visiting Professor in the Department of History of Art at the University of Oxford and a Visiting Fellow at Worcester College, Professor Burns will complete her second book, Performing Innocence: Cultural Belatedness and U.S. Art in fin-de-siècle Paris.

Dr. James Smalls is an art historian, with a focus on the intersections of race, gender, and queer sexuality in the art and visual culture of the nineteenth century, as well as the art and visual culture of the black diaspora. He is the author of Homosexuality in Art (Parkstone Press, 2003) and The Homoerotic Photography of Carl Van Vechten: Public Face, Private Thoughts (2006). He has published essays in a number of book anthologies and prominent journals, including American Art, French Historical Studies, Third Text, Art Journal, and Art Criticism. His book chapters and articles include: Menace at the Portal: Masculine Desire and the Homoerotics of Orientalism (2016), The Soft Glow of Brutality (2015), A Teacher Uses Star Trek for Difficult Conversations on Race and Gender (2015), Racial Antics in Late Nineteenth-Century French Art and Popular Culture (2014), Sculpting Black Queer Bodies and Desires: The Case of Richmond Barthé (2013), and Exquisite Empty Shells: Sculpted Slave Portraits and the French Ethnographic Turn (2013). Smalls is currently completing a book entitled Féral Benga: African Muse of Modernism.

In 2006, Smalls curated a two-part exhibition at the Baltimore Museum of Art on the art, career, and international influence of the African American artist, Henry Ossawa Tanner. In 2009-2010, he served as the Consulting Editor for the five-volume set of The Grove Encyclopedia of American Art. In 2015 he was appointed to the Advisory Board for The Archives of American Art Journal.