Travel and Translation. A Lunchtime Series of Online Discussion Panels 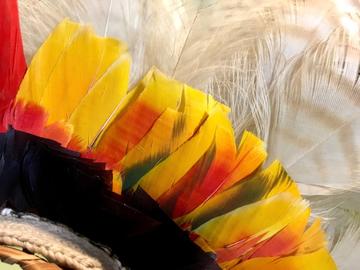 image provided by Lauren Working, one of the speakers – taken by herself of Pitt Rivers Museum item.

David Stirrup, ‘ “Oxford is a world where everything about my own world is alien”: Native North American Presence in Oxford’

Lauren Working is a postdoctoral researcher on the TIDE project (Travel, Transculturality, and Identity in England, 1550 -- 1700), with an interest in Tudor and Stuart sociability, empire, and material culture. Her first book, The Making of an Imperial Polity: Civility and America in the Jacobean Metropolis, explores how English colonization transformed taste and political culture in early seventeenth-century London.

David Stirrup is Professor of American Literature and Indigenous Studies at the University of Kent, where he is also and Director of the new Centre for Indigenous and Settler Colonial Studies . He is the Principal Investigator on the AHRC-funded project ‘Beyond the Spectacle: Native North American Presence in Britain’.

Dexnell Peters is the Bennett Boskey Fellow in Atlantic History at Exeter College, Oxford. He is interested in the History of the Atlantic World, and, particularly, the cross-imperial relations of the British, Spanish, French and Dutch Greater Caribbean. His current research project makes a case for the rise of a Greater Southern Caribbean region (inclusive of Venezuela and the Guianas) in the late eighteenth century, showing evidence for a very polyglot, cross-imperial and interconnected world.