Flaubert was fascinated by la bêtise – stupidity – and by platitudes or stereotypes that he heard repeated around him. He collected the things he heard in a Dictionnaire des idées reçues (Dictionary of Received Ideas), though it was not published during his lifetime. In his novels, too, he integrated the language and ideas of other people into the fabric of the narration, using what is now called ‘indirect free discourse’. Although he didn’t invent it (Jane Austen also uses indirect free discourse), he made extensive use of it, so that Roland Barthes saw his writing as a network of quotations without quotation marks.

While Flaubert’s habit of collecting verbal ‘objects’ (chunks of well-worn, clichéd language or set phrases that people repeated unthinkingly) is well known, it is perhaps less obvious that he also collected visual objects. These are integrated into his novels in the form of ekphrasis (the verbal description of a visual work of art). These two collections – the verbal and the visual –  are in some ways similar: by ‘quoting’ the ready-made visual codes of his time Flaubert was satirizing them. He was interested in the mass-produced art that circulated in the nineteenth century in greater quantities thanks to cheaper, industrial methods of production. In a later novel (L’Éducation sentimentale, 1869), for example, he made fun of what he called ‘Industrial Art’. He also uses satirical ekphrasis to mock the images associated with Romantic idealism, which were already outdated in the 1850s.

Although the term was not yet in use, the Bovarys’ wedding cake is an example of kitsch. The term, originally German, originated in the art markets of Munich in the 1860s and 1870s. It was used to describe cheap, mass-produced art and suggested its sentimental, melodramatic, or cheesy nature. The nineteenth century saw the first great peak of kitsch. New modes of consumerism provided a pleasurable, if momentary, escape from the drabness of everyday life for the growing middle classes; this helps explain the kitsch liking for historically distant periods or exotic places (such as medieval fortresses and Romantic lakes, not necessarily made of sponge cake and jam). The consciousness of kitsch is itself a by-product of Romanticism: by seeing art as a form of transcendence, and artistic originality as (along with love) the highest form of individual expression, Romanticism effectively creates a new conceptual space for art that fails to reach such heights.

The Bovarys’ wedding cake is a superb example of the kitsch object, combining many of the defining qualities of kitsch. It is a second-rate imitation of obsolete art forms in materials that are pretending to be something that they are not. It illustrates a divorce between attempted aesthetic effect (exotic or picturesque) and function (eating). It imitates the effects of a grand artistic tradition (architecture), and of ‘noble’ material (marble), in everyday materials (cake, jam and cardboard). The cake also appears to arise from what are usually seen as the two inspirations of kitsch: status-seeking and escapism. The rest of the wedding feast is rustic, if abundant, so Emma’s social aspirations are concentrated in the cake itself. At the same time, it reflects her yearning for escape.

Flaubert does not tell us that the cake is kitsch, or that it brings together a whole series of Romantic visual stereotypes. According to his famous doctrine of authorial impersonality, the narrator should not tell the reader what to think: within the text the author/narrator should be present everywhere but visible nowhere. So we are left to make what we will of the cake.

In fact I think that this description – like a handful of others in Flaubert’s works – does not simply denounce kitsch in a bourgeois gesture of contempt for popular culture. It embraces it, exaggerates it, hams it up. This is self-aware kitsch, pushed to an extreme point, so that the object becomes surreal. One might compare it to the aesthetics of camp. There is something celebratory about it after all, and one can almost hear Flaubert’s famously loud roar of delighted laughter.

There have been very few attempts to represent the Bovarys’ wedding cake either in two- or three-dimensional form. For the 2021 Flaubert bicentenary Valérie Duclos has published a lavishly illustrated book of recipes associated with Flaubert or Normandy, which includes the cake (see image). It looks as though it might be delicious, but it is not a literal version of Flaubert’s description. 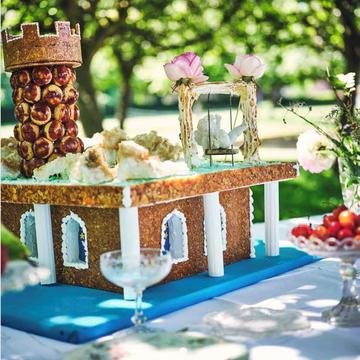 I have also tried to draw the cake myself, partly to help the Oxford Cake Shop’s design team and partly because I wanted to experience at first hand quite how absurd an object it is. The image here is my third attempt, and I’m afraid the jam lake had me completely stumped. Perhaps it would be better to use collage or photoshop as a medium. I would love to see other people’s versions. Please send your take on the cake (drawing, painting, collage, photoshop, baking, sculpture in icing or…?) to MmeBovaryWeddingCake@gmail.com. 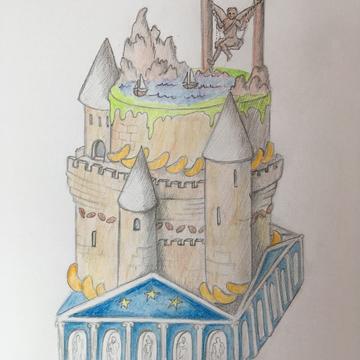 My own (third) attempt to draw the cake. 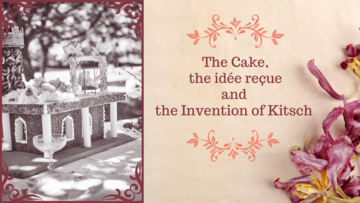