The Bovarys’ wedding cake is an elaborate Flaubertian joke which brings together contrasting layers that don’t work as a whole. Nabokov, in the notes he used for his lectures on Madame Bovary, called this Flaubert’s ‘counterpoint’ or ‘layer-cake’ method.

The cake is from Yvetot, a quiet local town, rather than the much more glamourous capital of Normandy, Rouen. Yvetot seems to have been one of Flaubert’s many running jokes. The town even appears in his Dictionnaire des idées reçues (Dictionary of Received Ideas), in which he spoofs platitudes that he heard around him. He mocks the set phrase by which people refer to their bucket-list of ‘places to see before you die’ with the self-deprecating substitution of this nearby town: ‘Yvetot: Voir Yvetot et mourir’. One might translate this into English, for an English person, as ‘Ten places to see before you die: Milton Keynes’, but a suitable equivalent would have to be substituted for other countries (suggestions on a postcard please). Literally it means ‘Yvetot: See Yvetot before you die’. Flaubert uses the same example in a letter when, arguing that the grandeur of the topic doesn’t matter in literature, he describes his ambition to write ‘un livre sur rien’ (‘a book about nothing’): ‘Yvetot donc vaut Constantinople’ (‘Yvetot is thus worth Constantinople’).

Why, though, does he describe the cake in such detail? In the 1830s when Emma is growing up, conflicting visual codes dominate the world of art, and although she has only the haziest second-hand notions of that world, she has seen engraved illustrations in books, and no doubt images d’Épinal (cheap prints, produced in the town of Épinal, that were sold individually). Her wedding cake combines these different and incompatible codes.

The first layer is the box or support for the cake, which imitates the form of a neo-classical temple with statues in niches. Classical forms, borrowed from ancient Greek and Roman art and architecture – columns, porticoes, draped nude figures – had supplied the dominant visual register for French art for at least two centuries, and in the 1830s classicism was still a powerful force in academic art. It was however on the back foot, attacked by enthusiasts of Romanticism.

The first level – the neo-classical temple – is thus at war with the second layer of the cake, which imitates a donjon or fortified castle, complete with battlements. In Flaubert’s first draft this was to be the dominant theme of a more unified cake, which was to figure a ‘château fort à triple étage’ (‘a three-storey castle’). This is Romantic medievalism, which entered Emma’s fantasy life via novels that she read in her convent school. These include the novels of Walter Scott, which were translated almost immediately into French and other languages, and very widely read in the 1820s and 30s. She would have liked to be a chatelaine in a long bodice gazing out from her ogive window at a knight with a white feather in his helmet, galloping on a black horse. The fortress suggests a certain picturesque melancholy, and in Flaubert’s Dictionnaire des idées reçues we find the entry: ‘Donjon. Éveille des idées lugubres.’ (‘Donjon. Inspires melancholy thoughts.’)

Moving up to the top layer of the cake we go from Romantic cod-medievalism to Romantic sensibility or sentimentalism. This layer represents a green meadow with a lake of jam, rugged rocks and little boats, a twee representation of the wild landscapes that had been popularized in the eighteenth century along with notions of the picturesque or the sublime. The valorisation of untamed nature suggests a set of ideas best known from the writings of Jean-Jacques Rousseau, who, of all the Enlightenment philosophers, had the most widespread influence on the Romantics. One scene of his novel Julie ou la nouvelle Héloïse (Julie or the New Heloise, 1761) has frustrated lovers reunited in a boat, with moonlight reflecting on lake Leman near the Meillerie rocks. Charles Bovary’s first wife was called Héloïse, which makes Emma ‘the new Heloise’ (poor Emma, who dreams of being a unique individual in a very Romantic way, is also the third Madame Bovary of the novel, following Charles’s mother and first wife). Emma’s youthful reading has also included poetry by Lamartine, and in particular ‘Le Lac’ (‘The Lake’, 1820), which was something of a cult for French Romantics. She knows parts of by heart and much later sings it during her own boat trip with a lover (on the river in Rouen, which smells of tar and is covered with oil stains). Flaubert’s Dictionnaire des idées reçues tells us how commonplace the association of lakes and love had become: ‘Lac. Avoir une femme près de soi, quand on se promène dessus.’ (‘Lake: Have a woman near at hand when going boating on one.’).

Reigning over the lake on the top layer of the cake is Cupid, the God of love, in a chocolate swing decorated with real rosebuds. This hardly needs comment, but the word Flaubert uses for the swing is ‘escarpolette’, which might make one think of Fragonard’s rather raunchy painting of that name, complete with rosebuds. The ‘real’ rosebuds, appearing here among images that are false at so many levels, remind us that even the real can pretend to be something it is not.

I’ve separated this discussion into paragraphs, but Flaubert doesn’t give us any neat separations between the incompatible visual effects of the different layers. His description of the cake – though not the English translation – moves in one absurd, pile-up of a sentence from the base to the summit (from ‘À la base’ to ‘au sommet’).

Flaubert, Gustave, Dictionnaire des idées reçues. This was only published posthumously and is usually included at the end of Bouvard et Pécuchet, which can be found in many editions. You can read the Dictionnaire in French here: https://fr.wikisource.org/wiki/Dictionnaire_des_id%C3%A9es_re%C3%A7ues A stand-alone English translation, by Gregory Norminton, is published by Alma Books (2017). 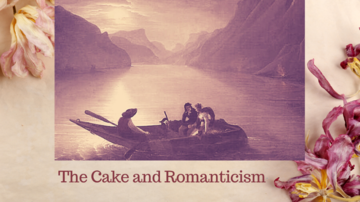